A woman holds water bottles as she walks past the Pantheon in Rome, Italy, Aug. 2, 2022. (Xinhua/Jin Mamengni)

Many countries reported temperatures over 40 degrees Celsius, including Portugal, which recorded a new high of 47 degrees Celsius earlier during this heat wave.

ROME, Aug. 8 (Xinhua) — The most severe heat wave in recent memory has gripped most of Europe since Monday, with record high temperatures in several countries causing severe economic and health damage.

The spell of unusually hot and dry weather sparked wildfires in Portugal, Spain, France, Italy, Greece and elsewhere. In Spain, more than 4,000 hectares of land have been burned in forest fires, while in Europe tens of thousands of people have been forced to flee their homes, according to media reports.

The heat and lack of water are said to have caused many deaths across Europe, either from heatstroke or other means. Many countries reported temperatures over 40 degrees Celsius, including Portugal, which recorded a new high of 47 degrees Celsius earlier during this heat wave.

In Italy, 19 cities were on red alert on Monday, meaning the temperature and weather conditions were so severe and long-lasting that they could impact the well-being of healthy individuals. 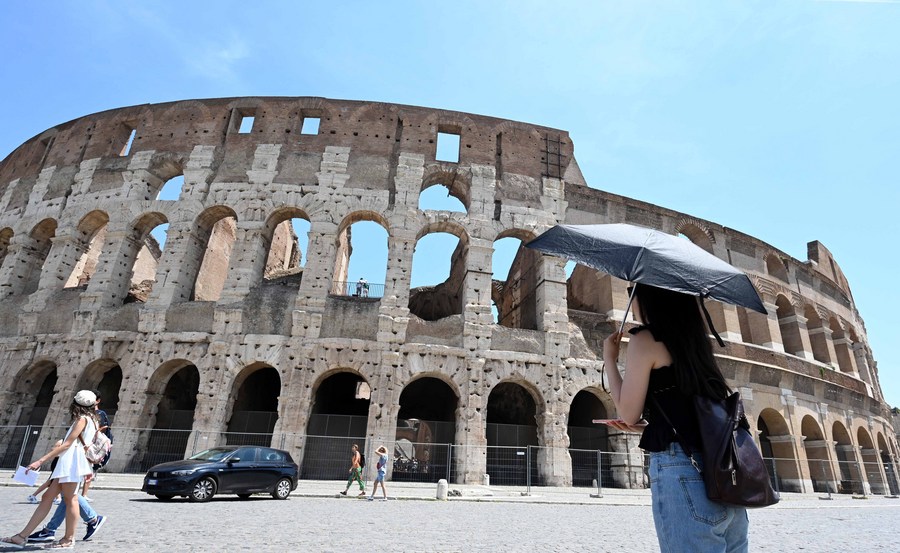 A woman takes shelter from the sun with an umbrella in hot weather at the Colosseum in Rome, Italy, June 17, 2022. (Photo by Alberto Lingria/Xinhua)

Italy’s National Research Council’s Institute of Atmospheric and Climate Sciences said last week that this year was on track to be the hottest and driest year on record since 1800. Temperatures in the country for the period between January and July were 0.98 degrees Celsius. above average for the period beginning in 1800, while July average temperatures were 2.26 degrees Celsius above normal, according to the institute.

Although there is no full data available yet, media estimates that the hot and dry weather has caused billions of euros in agricultural production losses in the most affected European countries.

In Greece, France and Italy, weather conditions are expected to reduce olive oil production, causing prices to spike. In France, 2022 wine production is expected to suffer in terms of quantity and quality, while Italy is also expected to see corn and animal feed production decrease.

The weather-related developments in Europe come amid already significant pressure on global food prices due to rising fuel prices and other supply chain issues intensified by the conflict between Russia and Ukraine.

Another hard-hit economic area in Europe is tourism, which is struggling to recover from the effects of the COVID-19 pandemic. Despite the hot and dry weather, reports indicate that this summer is the strongest for tourism in Europe since 2019. But according to Stefano Brindisi, director of tour operator Expedia, which operates in most European countries, the heat is a major point. . of concern.

“There are many inquiries about the impacts of the heat on travel plans that could go back several months,” Brindisi told Xinhua. “For many travelers coming to Europe, this summer is the first big trip since before the pandemic.”

“Some people have delayed their plans or looked to destinations in northern Europe where the heat is less intense. It’s clear that this is something people are worried about and adapting to,” Brindisi said. “There is no doubt that this limits the upside of the recovery of the tourism sector.” 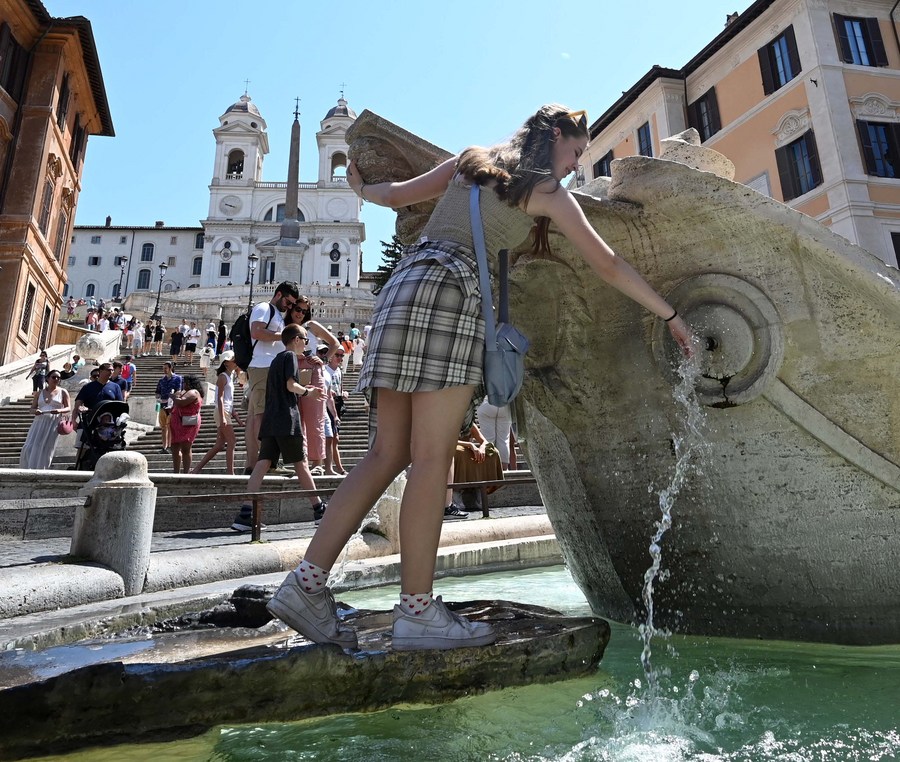 A woman refreshes herself with water in hot weather at the Barcaccia Fountain in Rome, Italy, June 17, 2022. (Photo by Alberto Lingria/Xinhua)■